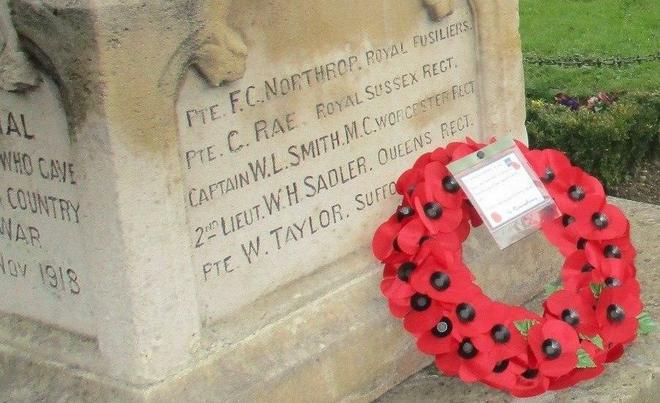 On Friday 9th November 2018 Harston and Newton Community Primary school held its commemoration of the centenary of the end of the First World War. We held a special assembly, which featured a cascade of the poppies we had made (one for each pupil at the school). Then school representatatives laid a wreath at the Harston Village War Memorial, near our school.

Year 6 pupils lay a wreath on the village memorial

The event was especially poignant for us at Harston and Newton because one of the names on the memorial - William Sadler - was the Headteacher at our school.

William Harold Sadler was born in Great Bradley, Suffolk, on 6th June 1879. His parents were Samuel and Ada Sadler. He had four brothers and two sisters.

William’s first job was as a sailor on a merchant vessel. He had the rank of Able Seaman. It seems that he left the merchant navy after only a few years, perhaps as a result of injury. At the same time he registered with the Royal Navy Volunteer Reserve, which had been established to identify suitable recruits for the Royal Navy in time of war. William married Netta Smith, a Cambridge girl, in 1904. He had retrained as an elementary schoolmaster, and his first post was at Green End (Comberton) village school. He and Netta were provided with a school house to rent at Comberton, and they had two children: Frederick (1906 – 83) and Audrey (1909 – 76).

By the time of the 1911 census William had been promoted to Head Schoolmaster at Harston Elementary School. He and his family lived at 20 Church St, Harston. This had previously been the site of the old National School, but when the present Board (Council) school was built as a result of the 1870 Education Act, 20 Church St was retained as a home for the schoolmaster. It continued in this function for nearly 100 years, and the last tenant was a school caretaker. In fact, William may have been the only trained teacher at Harston school, but the custom was to employ ancillary workers too, and to use the oldest children to instruct the youngest.

When the First World War began in 1914, Britain had a small professional army, and William could not have imagined that he would be involved. However, in December 1915 William was officially notified that he had been put on the Army reserve list. By November 1916 the Army was in urgent need of fresh troops, so 37-year-old William was called up. Harston School went without a professional teacher for the next three years.

Many former sailors were assigned to the newly formed British Royal Naval Division of the Army, and William was posted to its Nelson Battalion. The idea was to use the loyalty and service traditions of former sailors in the land war, so these new soldiers had particular ranks, terminology and practices.

At the beginning of 1918 William had shown sufficient talent to receive a Commission. He was made a 2nd Lieutenant and transferred to the London Regiment, a newly formed army unit. William was involved in one of the decisive battles of 1918, at Amiens in Northern France. This action repulsed Germany’s final offensive of the war. William was killed in action on 24th August 1918. He was laid to rest at the Vis-en-Artois War Cemetery near Calais.

Netta remarried in 1921 and lived in Cambridge for the rest of her life. She died, as Netta Prior, in 1969. Her son Frederick Sadler had many children and grandchildren, and it is possible that some still live in the Cambridge area. 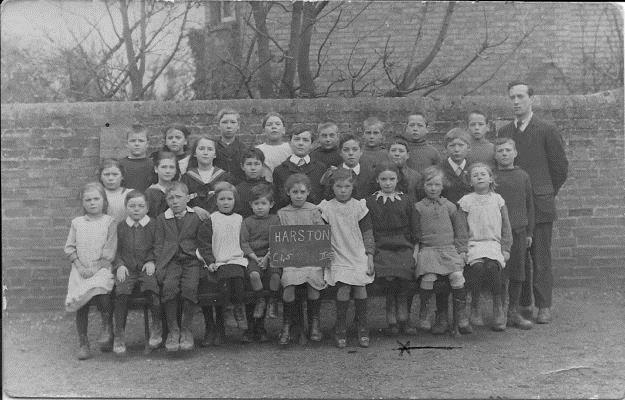 The teacher is Mr Royston, who was appointed after the war

I started school at the age of 3, and was taken there and taken care of by one of our neighbour’s daughters. Our teacher in the infants class was a Miss Beaumont, daughter of the school master, Mr. Beaumont. Mr. Beaumont was a rather elderly man and he was followed by a much younger man a Mr Sadler. Mr Sadler was a very forward- looking man and a strict disciplinarian and was not above using the cane when necessary. He completely changed the whole set up at the school. For instance the old master would appear to sleep at his desk nearly all the afternoon and leave one of the older pupils to try and keep some kind of order. At this period I remember we were given cards of Boer War soldiers to draw from. Under Mr. Sadler a good woodwork class was introduced and some very good work was produced by some of the boys. Cookery classes were also introduced for the girls.
He gave special attention to his most promising pupils and got several through to passing scholarships which in those days were very competitive. I was one of the successful ones and went to Haslingfield school for the examination which I passed, and then went to the Leys School at Cambridge for the final oral exam which was also successful. Unfortunately my parents were too poor to let me have the further education at the County School and I left school at the age of 13.

The first world war was now well under way and Mr. Sadler was called to the forces and was unfortunately killed in action. The position of school master was filled by a Mr. Royston from Haslingfield school.

Killed in action on August 24, William Harold Sadler of Harston, 2nd Lieutenant, London Regiment, ‘The Queen’s’. the youngest son of W C Sadler, ‘while leading his platoon in a successful attack’. He had been a schoolmaster at Harston School from April 1912, joining the Royal Naval Division in October 1916, gaining a commission in June 1917, then trained as an officer with the 5th O.C.B. at St John’s College, after which he joined The Queen’s Regiment. Mrs Sadler is unable to answer every letter of condolence, and begs to thank all those who have expressed their sympathy.